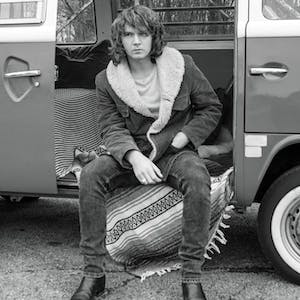 Ian Noe draws on the day-to-day life of Eastern Kentucky on his debut album, Between the Country. Recorded in Nashville with unhurried production by Dave Cobb, these 10 original songs introduce a number of complicated characters, diverse in their own downfalls but bound together by Noe’s singular voice.

“I’ve always thought that Eastern Kentucky had a certain kind of sound, and I can’t really explain it any better than that,” he says. “What I was trying to do was write songs that sounded like where I was living.”

The lead track, “Irene (Ravin’ Bomb),” sets the tone for the album, telling the story of an alcoholic woman who fails to conceal her addiction from her family. Throughout the remaining tracks, family relationships are tested, bad decisions are inevitable, and more than a few people meet an untimely end. Titles like “Junk Town,” “Dead on the River (Rolling Down)” and “Meth Head” capture the dramatic situations faced by people in the region.

However, Between the Country is not necessarily an autobiographical album. Instead, Noe absorbed these harrowing experiences through people he’s met or stories he’s heard. Not yet 30, Noe was raised as the oldest of three children in Beattyville, Kentucky, where his parents still live in the house he grew up in. His father is a longtime youth social worker, while his mother has been employed by the same local factory for more than 20 years.

Noe learned to play guitar from his father and grandfather. As a young boy, he adored Chuck Berry’s “Johnny B. Goode” and spent years trying to emulate Berry’s way of playing guitar. Before long, Noe could pick country standards like “I Saw the Light” and “Wildwood Flower.” By his teen years, he gravitated to Bob Dylan and John Prine after discovering them through his family’s music collection. Neil Young soon became another favorite, along with Dwight Yoakam and Tom T. Hall, who hail from the same part of the state.

Noe says, “There’s a silence about Eastern Kentucky. It’s quiet, at least where I was raised. There are a lot of places you can go and write and listen to music and not be bothered.”

All through his childhood, his great aunt often asked Noe if he’d written any songs yet. By 15 or 16, he decided to try. A family friend, who was also a manager at the Dairy Queen where Noe worked in high school, offered to help him book a few shows and get some songs recorded. Although Noe considers them just bedroom recordings now, the discs gave him something to sell when he started playing coffee shops and other small stages around Winchester and Lexington, Kentucky, and a little bit in Ohio.

“For me it was a turning point just getting a few songs that I was happy with. I didn’t understand anything about making a record, or what that meant, when I was 15 or 16,” Noe admits. “It was the farthest thing from my mind, but once I got a couple of songs that I was satisfied with, I just kept going.”

After high school, Noe took an office job close to home instead of enrolling in college. In his early 20s, he relocated to Louisville, hoping to get a band together and write music, but he had to constantly work odd jobs as a subcontractor to make rent. After a year, he briefly returned to the office job back home before finding work on an Eastern Kentucky oil rig – which he considers the best job he’s ever had, outside of music.

Soaked with oil after his 12-hour shifts, Noe never once considered what a career in music would look like. Yet through a mutual acquaintance, his original songs attracted the attention of an artist manager. Impressed with his raw talent, she sent him an email of encouragement, which ultimately led to a working relationship. Since that time, Noe has opened multiple dates for kindred spirit Colter Wall, tapping into an audience that appreciates the sincerity and austerity in Noe’s original songs, too.

Noe received another stamp of approval in February 2019 after singing at a John Prine tribute concert at the Troubadour in Los Angeles – with Prine himself in the crowd. Staged the night before the Grammys, Noe’s performance led to an offer to open three shows for his musical hero. As Noe puts it, “I’ve sat around my whole life thinking about what that would be like.”

Although touring is imminent, Between the Country serves as a potent snapshot of home. The black-and-white cover photo alludes to a lyric in the title track but Noe believes it also illustrates the album as a whole. It’s the same approach that Lucinda Williams employed on her landmark 1998 album, Car Wheels on a Gravel Road, which Noe cites as one of his all-time favorites. “If you have a collection of songs where the subject matter is pretty much the same, and it’s coming from the same place, I think it’s important to have some kind of picture that reflects that. I’ve always felt that way,” he says.

Noe now lives in Bowling Green, Kentucky, about an hour north of Nashville, where his bandmates are based. After years of writing songs alone and playing solo acoustic sets, he now prefers touring with a band, making it possible to carry the overall mood of Between the Country out on the road as well. After all, he and Cobb recorded the album live on the floor, completing the sessions in two days. Amid these uncluttered arrangements and a relaxed vibe, Noe’s evocative voice truly stands out.

“I wanted a warm sound – that analog sound,” Noe says. “When we were getting the rough mixes going, that’s how it sounded, and that’s the direction it went in. You want people to be able to hear what you’re saying and what you’re singing about, and I think analog makes a good song stand the test of time.”